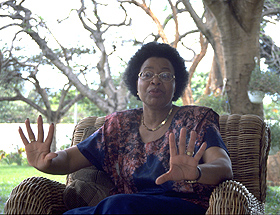 “Travelling cinema has two great advantages: the first is that it is “movel”, it is mobile, and it can go on the spot, the second advantage is that cinema communicates in a straightforward way, with great empathy, because it is image, not spoken words, so reading is not required in order to understand. It is image!”.

Ms Machel, you had the opportunity to know Cinemovel: what do you think about the project and, more generally, of cinema in relation to Mozambique?
First of all I would like to congratulate CMC on this initiative. Promoting travelling cinema in the country is a very creative idea, different from the way that a business company normally celebrates its anniversary and in this case its presence in Mozambique. Giving the opportunity to the country to see itself through cinema has been a truly original idea.  It’s a very important initiative because the ability to communicate is one of the biggest problems in our country. In various parts of Mozambique, countryside, cities, north, south, we have radio, a bit of television e some newspapers. But these means of communication don’t reach less privileged communities so Cinemovel has two great advantages: the first is that it is mobile and it goes on the spot; the second advantage is that cinema communicates in a straightforward way, with great empathy, because it is image, not spoken words, so reading is not required in order to understand. In other words, through cinema you bring to this people the whole country and the world and, most importantly, you bring back a message from these communities, allowing them to communicate with others.

I think that it has been a truly extraordinary idea and I know it has a cost, but I think that it should even be repeated. As you had the opportunity to notice, there are children that had no idea of what cinema is; they looked at those images as if they were under a spell!

This is something that has left a mark on these children and in my opinion nothing else would have been able to influence them to such an extent and make them so enthusiastic. 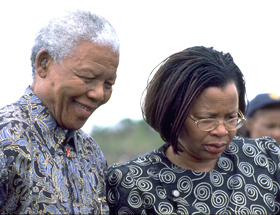 For me, the biggest prize that you can get out of all this is exactly this amazement, those eyes that were wide open with curiosity and enthusiasm. This is the best result that you can take with you: the opportunity of having done this for thousands of adult citizens, but especially for the children.
So, the cinema in Mozambique. I say this with great sorrow, but we have to acknowledge that at some point cinema completely stopped. In the early days of our independence we were amongst those countries of southern Africa that made an immense effort to produce Mozambican cinema, and some results were already being achieved.

We didn’t import anything and we produced ourselves; the famous ‘Kuxa Kanema’ and the feature film tests that we tried out here were initiatives that no other country of this region was able to do, although some of those countries had reached independence much earlier than we did.

So a sort of foundation was being laid and cinema became an instrument of culture, communication and education for people. 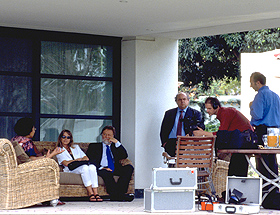 All this has stopped.

It is true to say that one of the main cause of this has been the war, but I believe that recently, in the period of national reconstruction that we are engaged in, culture isn’t being emphasised as much as reconstruction for the purpose of producing food, school or health centres. Over the past year and a half we can see an effort in this direction, instead.
We have the school games and when a government organised the second edition of a popular music or dance festival, this is already a clear intention of considering the cultural element as an important component of the national reconstruction process. With regards to cinema, we can say that we should restart from the beginning, especially after what happened to the National Institute of Cinema, but I would encourage initiatives like this one, that have a very big impact, despite being small.

1) In the ‘80s Kuxa Kanema were the earliest experiences of itinerant cinema in the country. They mostly featured screenings of educational documentaries.

The text is an excerpt from the video interview to Graça Machel Mandela produced by Cinemovel for the documentary film Mozambico dove va il cinema, Maputo 2001