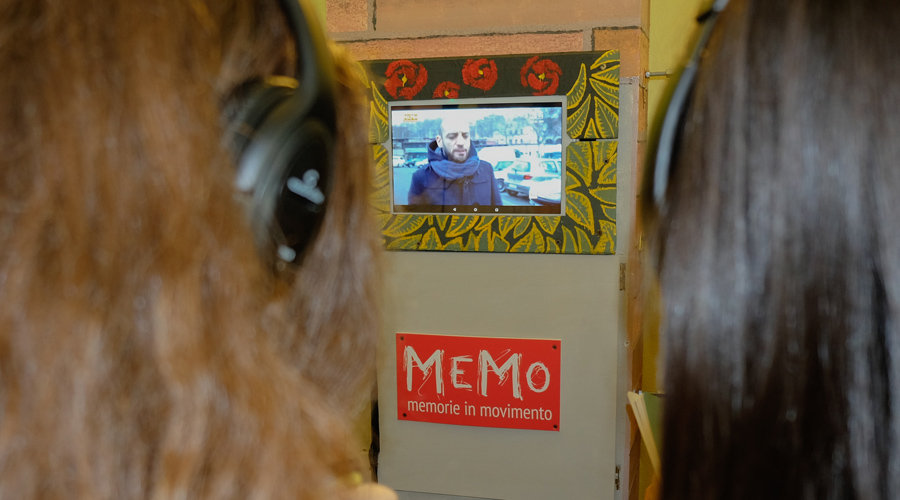 MeMo – Memories in Motion is a multimedia project created by Cinemovel Foundation to tell the story of a property located in the Northern town of Galbiate (Lecco, Italy) redeemed by the justice system in the mid 90’s, from its previous owners affiliated to the Mafia: the Coco Trovato family.

Today that property is a building open to the local community where the charity organisation L’Arcobaleno runs an elderly community centre. The confiscated Coco Trovato building is a tangible testimony of the ramification of the Mafia even in Northern Italy and also a testament of the importance of the law 109/1996, the so called “Rognoni-La Torre” law of 1996 which enables the justice system to take away Mafia assets and to give them back to the community.

MeMo – Memories in Motion takes both students and teachers in a learning journey on the subjects of legality and communal recollection of events, thanks to a multimedia project supported also by the archive of Rai Teche. The strength of the project is the ability to tell the story of the building formerly owned by the Mafia through the archive images and at the same time to engage with the viewers of today, sharing a common experience of those facts and making sense of relevant events still happening today.

Cinemovel Foundation has always been at the forefront to promote a collective journey on these themes effectively engaging with charities, members of the local community and residents of L’Arcobaleno Community Centre of Galbiate to promote past events of legality and social justice. In order to do that MeMo – Memories in Motion enlists also first hand reports from journalists, authors and civil society representatives like Carlo Lucarelli (author), Pierfrancesco Diliberto (PIF), Giuseppe Marrazzo (journalist), Enzo Biagi (journalist) e Don Luigi Ciotti (founder of the charity Libera Terra). Students are involved in an “active” research to confront themselves with themes of legality, collective memory, social commitment.

“MeMo is the brainchild of Cinemovel Foundation resulting from a journey started in 2006 with the travelling Film Festival of Libero Cinema in Libera Terra, a Film Festival engaged on the subjects of legality and the fight against the mafia. Libero Cinema in Libera Terra has been a 12 years long experience of an itinerant film festival in locations confiscated to the mafia to tell their story, to confront with main actors in this process and promote their hard work. This journey has been possible thanks to old and new technologies, cinema and new media, and it has been a positive one. In MeMo we also put the experience of the Schermi in Classe project, started in 2011 and designed to create a learning journey on the subject of legality aimed at secondary schools, to foster a dialogue on these matters between different generations. The main objective of the MeMo project in fact is to encourage a dialogue between L’Arcobaleno charity and the people of the local community in Galbiate about social justice and the fight against the Mafia.” Elisabetta Antognoni, chair of Cinemovel Foundation.